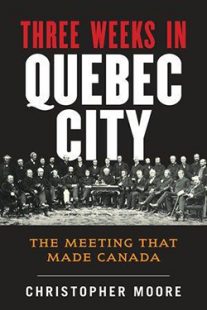 "In 1864, delegates from all the British North American provinces -- the "Fathers of Confederation" if you like -- gathered at Quebec City and created almost all of the constitution Canadians still live with. Three Weeks is a day-by-day, debate-by-debate, and dinner-and-dance-by-dinner-and-dance exploration of that momentous event. It's the liveliest, most readable, most detailed study you will ever find of how the nation called Canada was formed." 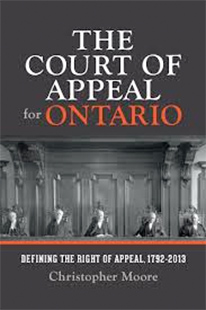 the court of appeal for ontario 1792-2013:
defining the right of appeal

Is the right to appeal to an independent panel of judges fundamental to the rule of law? It seems so, but it is much newer than we think. Moore explores how the idea of appeal has evolved over 250 years in this commissioned history of Ontario’s top court, a court which has been called everything from “a bastion against tyranny” to “murderers’ row.” 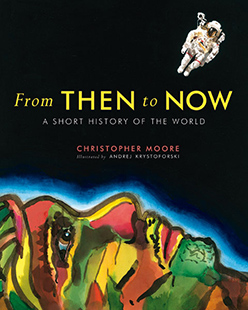 from then to now
a short history of the world

2011 Winner Governor General's Award in Children's Literature
Chris takes on the story of humanity: our ancestors in Africa 50,000 years ago, the way we spread out and took over the world, and how we are mixing back together again. Beautifully illustrated by Andrej Krystoforski.

From Then to Now

Now available from Tundra Books Fifty thousand years ago, our ancestors ventured off the African savannah and into the wider world. Now our technology reaches far into the cosmos. How did we get to where we are today? Join master historian Christopher Moore as he explains….

The images here are all from the original art created for From Then to Now by Andrej Krystoforski. See more at http://andrejk.ca/ 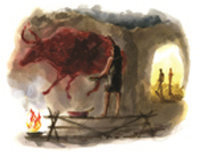 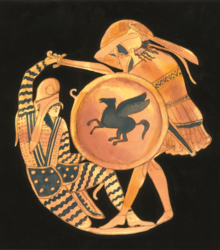 "Cast your light on the wall. Animals leap out at you: reindeer, horses, bulls, even thick-maned lions and curved-tusked mammoths.

They charge, they run, they leap. Some are surrounded by arrows or spears. Sometimes a hunter has placed his handprint among them. You are deep in a cave in the mountains, it is the Ice Age, and you could be anywhere across southern Europe, from Spain deep into Russia."

"Only one people in the known world remained beyond the power of the Persian king. These were the Greeks, who lived at the far end of civilization, west of the Persian territory. The Greeks had never had an empire. Cyrus would barely have thought of them when he proclaimed that his empire stretched to the end of the world. Still, the Greeks were a proud and stubborn people. Some of them chose to defy the king of all the world."

"Some years after the Polos went to China, a Moroccan scholar named Ibn Batuta made his pilgrimage to Mecca. Then he travelled on, visiting Muslim kingdoms in east Africa,along the coast of the Indian Ocean.

Later he went to India, which was then ruled by Muslim emperors, sailed to the islands of Southeast Asia, and carried on to China. After returning home to Morocco, Ibn Batuta journeyed south across the Sahara desert deep into Africa. As he travelled, he wrote detailed accounts of the people he met and the routes he took."

"One night in 1893, a young lawyer named Mohandas Gandhi was thrown off a train in the British colony of South Africa. The white settlers of South Africa did not like sharing their train compartments with non-Europeans. Gandhi spent the night shivering in a cold railroad station, and what he decided there changed the world."

"In 1968, the first humans ever to leave our planet broke out of their orbit around earth and headed to the moon, in a space capsule that would carry them behind it, past its mysterious “dark side” and back home. Because that test run went so well, more astronauts headed into space in July 1969. One of them, a quiet American named Neil Armstrong, became the first human to walk on the moon. “That’s one small step for a man, one giant leap for mankind,” he said." 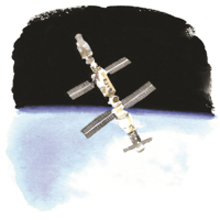 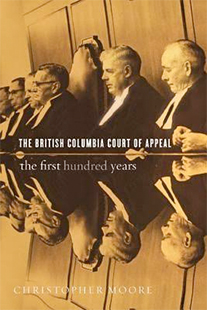 Chris wrote this history on a commission to mark the 2010 centenary of the court. This authoritative history explores how British Columbia’s highest court makes law and how a court can reflects the economy and society of the province. Chris also features one notable case per decade from the court’s files, from the Komagata Maru case to the same-sex marriage debate. 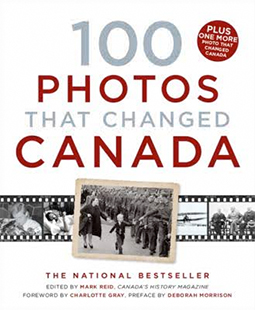 In 2009, Chris contributed several commentaries to this bestselling photohistory produced by the team from Canada’s History magazine. 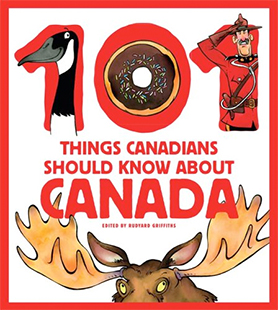 101 things canadians should know about canada

Chris contributed several bits to this lively new book based on a cross-Canada opinion survey run by the Dominion Institute. Loonie to Moose, Gretzky to Trudeau, Expo to Confederation, Snow to Beer – 101 Things has all the Great Canadian Stuff, with lively commentary from leading writers and charming illustrations by the Globe & Mail’s Anthony Jenkins." 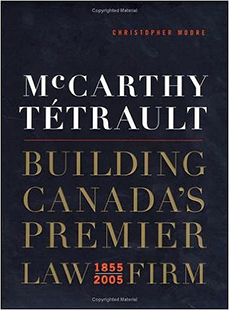 Chris set new standards in law firm history writing with this story of McCarthy Tétrault, Canada's leading law firm. Follow the transformation of Canadian legal practice - and of the firm that led the way. 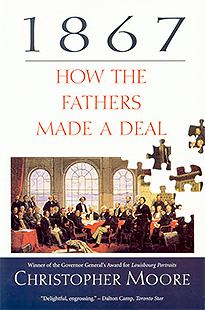 1867 is also about Canada in the 21st century. This dramatic, page-turning account of how the founders of Canada put together a successful constitution-making process has startling comparisons and conclusions about contemporary Canadian politics. Dalton Camp called it "just about the best book on our history I've ever read." Still widely available. 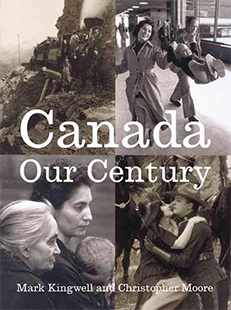 Astonishing photographs show Canada growing year by year from 1900 to 1999, with a surprising text commentary by philosopher Mark Kingwell and Christopher Moore. Canada: Our Century became the publishing sensation of the millennium eve in 1999, with 50,000 copies sold in barely three months. 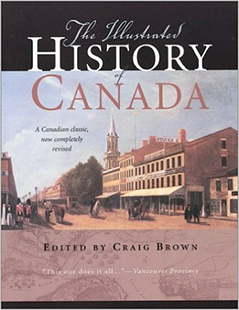 The illustrated history of canada

Chris contributed a long chapter on Canadian beginnings, 1600 to 1763, to this multi-authored history of Canada. "This one does everything!" exclaimed one reviewer. A bestseller when first published in 1987, the Illustrated History continues to set the standard among one-volume Canadian histories, and it has been translated into both French and Spanish. A brand-new revised edition marks the book's fifteenth anniversary. 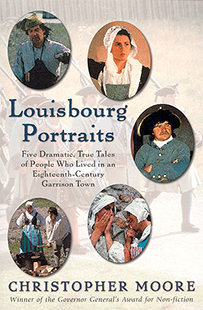 Louis Davory, Marie-Louise Cruchon, Jean Lelarge … true stories of the lives, aspirations, and fates of extraordinary ordinary people in an eighteenth-century city, seaport, and fortress. This was Chris's first book, and it has never been out of print since 1982. The 2000 edition from McClelland and Stewart has a new afterword.

story of a nation
defining moments in our history

What does fiction know about history? Chris contributed a thought-provoking introduction to this collection of short fiction about historical themes by Canada's leading fiction writers: Margaret Atwood, Timothy Findley, Roch Carrier, Antoinine Maillet, and many others. 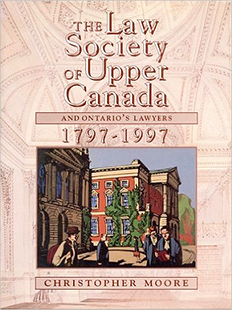 Lawyers get involved in everything: land, business, politics, crime, families, power, passion. So this history of Ontario's lawyers is also a history of Ontario from an unusual and surprising angle. The book was originally commissioned by the Law Society to mark its two-hundredth anniversary. Ask your bookseller or contact University of Toronto Press directly. 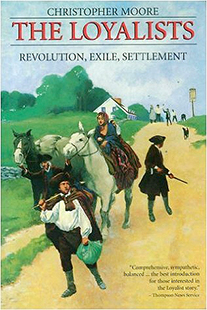 First published for the 1983-84 bicentenary of the arrival of the Loyalists in Canada, The Loyalists has been called "sympathetic, comprehensive, balanced… the best introduction to the Loyalist story." Still in print in trade paperback. 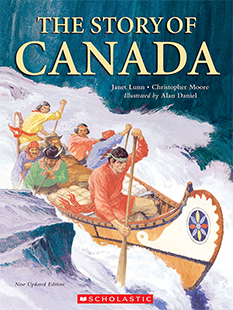 the story of canada

The full-scale, lavishly-illustrated history of Canada for young readers and their families. An instant best-seller from its first publication in 1992, it has a special place in a hundred thousand Canadian homes as one of Canada's most loved books. Chosen one of Canada's top ten young people's books of the century.
“In 2016 we gave it a great new update and redesign. Why? Because it’s 2016!” 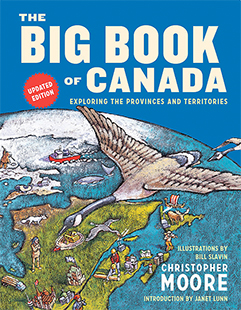 the big book OF canada

Gorgeous new edition, all updated, for 2017.  From Newfoundland to British Columbia to Nunavut, The Big Book of Canada explores the provinces and territories that are this country. Discover the majestic landscapes, the resourceful people, and the unique events that have shaped this land and those who call it home. 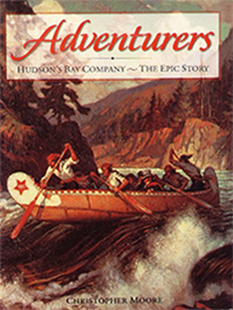 Schools, teachers, kids, and families often ask the Hudson's Bay Company for more info about its history. In 2001 The Bay asked Christopher Moore to write this lively, colourful history about fur traders, their native trading partners, and their contribution to Canada. Tens of thousands of copies have been donated to schools across the country. 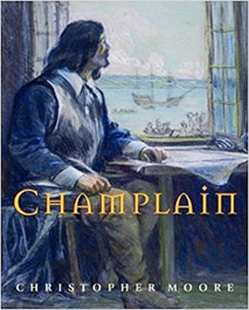 In 1604 Samuel de Champlain helped found Acadia, the start of European settlement in Canada. In 2004 Tundra Books published Chris's Champlain, the powerful story of the great explorer and mapmaker and his encounter with the First Nations of Canada. Quill & Quire magazine raved about Chris's "silky" prose and the dramatic story. 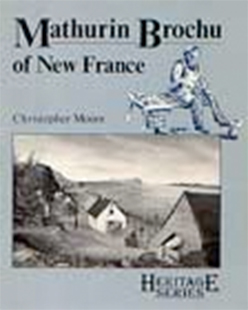 Mathurin Brochu was nobody famous. This little book for young readers takes an ordinary citizen of New France and follows his life in order to bring out dramatically what life was like in eighteenth century New France. (Sorry, this one is now out of print - look for it at your library.) 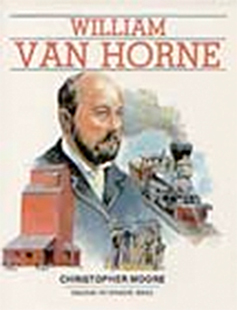 They called him "the railway general," the toughest, most determined, most successful railroad-builder in Canadian history, the man who completed the Canadian Pacific Railway. (Sorry, this one is now out of print - look for it at your library.) 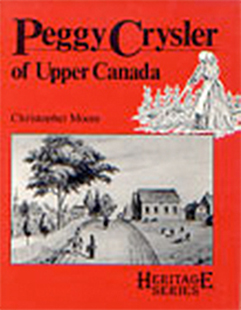 Peggy Crysler was nobody famous. This little book for young readers takes an ordinary citizen of Loyalist Upper Canada and follows her life, in order to bring out dramatically what life was like in Ontario's early days. (Sorry, this one is now out of print - look for it at your library.)